Or, I Watched Them So I Might As Well Review Them.

Here at Studd, we have long had a tradition of diving into all sorts of mean, nasty evil things.

The problem though is that to be honest, I really hated both of them.

Don't get me wrong, as with most films from the 1970's there are some excellent elements to each film, and I'll get to that, but both movies are so damaged in the end that the outstanding parts just aren't enough to save them.

John Byrum's 1975 film Inserts, really should have been a good film, really. Richard Dreyfuss stars, straight off of his turn in Jaws, as well as the Veronica Cartwright, Bob Hoskins, in one of his earliest film roles, and cult favorite Jessica Harper. 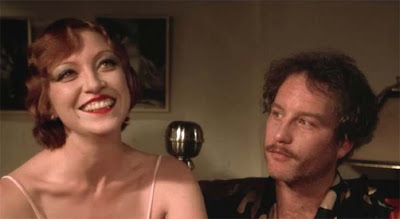 Dreyfuss plays a once popular silent film director who hasn't made the move to talkies, reduced to shooting "Stag" pictures in the living room of his Hollywood mansion. Angry, impotent, Dreyfuss is a mass of depression and angst. Veronica Cartwright plays his leading lady, a bright funny, heroin addict, having fun and making ends meet. The former Daniel Boone tv show actress, shines in all of her scenes and if she had been in more of the movie, it would probably have been a much better film.

Instead we end up with a good 40 minutes of back and forth conversation between Dreyfuss and producer Hoskins, girlfriend, played by Harper, that just drags on forever, pulling this film down into what wants to me an enlightened conversation about sex, but instead just bored me to tears.

Pretty Baby on the other hand is beautifully filmed, wonderfully acted, with a subtle and layered script. My problem, and I admit that this might not be fair, is that this wonderfully made film is about the love story between an impotent fetishist and the 12 year old prostitute he can physically succeed in having sex with.
I know I'm judging the film through 21st century eyes, but despite great performances from Keith Carradine, Susan Sarandon and Brooke Shields, and fine direction from the late Louis Malle, the film just sort of creeped me out.

What is it about mainstream 70's cinema and there obsession with unhealthy sex?

While the B-Pictures were having fun with Cheerleaders, Space Babes and goofy sexual escapades, the mainstream was giving us Brando at his most repulsive in Last Tango in Paris or Charlotte Rambling falling back into an affair with her former Concentration Camp commander in The Night Porter.

I think that might be one of the reasons that Rocky Horror was such a hit. Unlike the big films, Rocky made sex fun.

Maybe I should have just watched it a couple of times instead.
Posted by Rick Diehl at 9:21 PM