The Classics: Dawn of the Dead 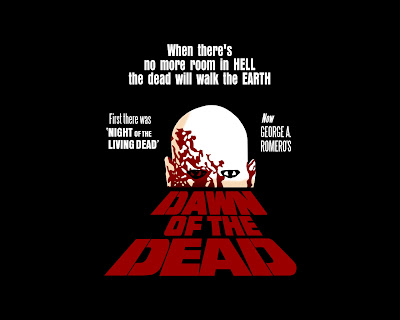 I was lucky enough to see George A Romero’s masterpiece, Dawn of the Dead during its original 1978 run at the lovely, domed Cinema 150 in during a showing that I then had to walk home from, all alone, very late at night.
Decades later, I remember just how dark it was, the chill of the air, the total emptiness on the roads on what was now a very early Sunday morning, and despite knowing that I had just seen a movie, the utter, mind numbing terror that gripped me during that long walk home.
But that’s what makes classic film, that ability to alter our perception of reality, to shift our emotional state and leave us walking home in the dark, emotionally raw and ready for the boogie man, or in this case shambling corpse to turn the corner and eat us.

Dawn of the Dead would certainly make any top 10 list I ever could come up with. At times as glaringly in your face as any film ever made, at other moments subtle and surprisingly quiet, Romero carries the story along with a steady hand that gets fantastic performances from his players, and in the end, not only creates what is probably the greatest horror movie ever made, but to me, one of the greatest movies ever made.
The story opens a few weeks after the events of Night of the Living Dead, and things are not looking good for mankind. The mass of walking dead has swollen to the point where they might already outnumber the living, most major cities have fallen and what’s left of society is rapidly falling apart too.
Fran (Gaylen Ross), a producer for a local television station watches as the newsroom spirals into utter anarchy, as staff and crew try to keep up with getting information out on the plague but who are all overwhelmed with how rapidly everything has fallen apart. 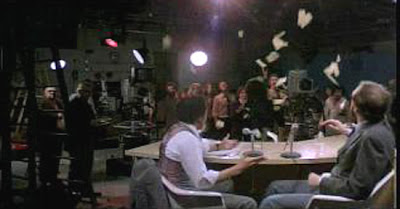 Soon she is joined by Stephen (David Emge), the pilot for the stations weather helicopter and Fran’s boyfriend who tells her he has a plan to get them out of the city and that if they wanted to survive they needed to leave right away.

We then cut to a building under siege by a large contingent of police clad in riot gear trying to clear the building and move the residents to a “safety” zone, that goes terribly wrong one of the officers goes insane and begins shooting everything that moves.

....one of the SWAT officers on the scene tries to stop the crazed cop, and is knocked to the ground. But the out of control officer is finally taken down by a large SWAT officer wearing a gasmask, who quickly makes his exit. 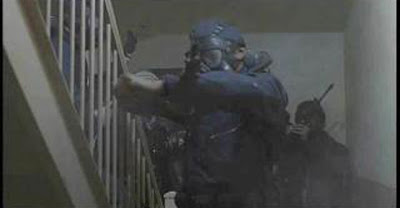 In several of the apartments the officers find the living dead and quickly dispatch them, but it is all becoming too much and at least one officer commits suicide out of pure disgust.

Overcome with the violence and with a face full of teargas Roger makes his way to the buildings laundry room where he runs into the masked cop again, who takes off his gasmask and introduces himself as Peter (Ken Foree).

The two men begin to talk and Roger tells Peter that he is joining a couple of friends in a helicopter and leaving the city that night, inviting the obviously useful Peter along.
Before the conversation can go much further they are interrupted by an old one legged priest who tells them that the rest of the bodies are walking around in the basement, and since he has given them the absolution its time for the police to put them down.

When the doors are opened hundreds of the walking dead come flooding out of the basement and for a time overwhelm the authorities, but soon enough the combination of police and national guard bring things under control and Roger and Peter calmly shoot the remaining corpses writhing on the floor, unable to rise on their own.

Fran and Stephen get to the helipad only to discover that the pad operator has been killed. Soon joined by Roger and Peter, and after a brief, but peaceful conversation with a group of men dressed as police preparing to flee on a boat, they make their way straight up into the relative safety of the air.
The next morning we get as close to a cross over with the original film as we are going to come, the helicopter files over the rural Pennsylvania countryside and we get a look at the folks on the ground.....

....going around in big groups shooting at anything that moves, hopefully dead, but as Ben from the original movie could tell us if he hadn't been shot, not necessarily.

Landing at a small airport looking to refuel, the foursome are soon attacked from all sides by the living dead wandering around the airport. In the confusion Stephen almost shoots Peter, causing him to almost lose his temper, knock Stephen to the ground and point his own rifle at him as a lesson in caution.

But the team makes it back in to the sky, and before too long find themselves circling a large suburban mall, that appears deserted and better yet has a helicopter pad on the roof making for a safe place to land and rest, safe from the ravenous corpses wandering in the parking lot below.

The group has another piece of incredible luck when while looking through various skylight windows they discover a set of rooms isolated from the rest of the mall and filled with Civil Defense rations.
Breaking into the mall and quickly securing the rooms, they stop to eat and rest.
Soon enough as Stephen sleeps, Roger and Peter decide to take advantage of their location and see if they can rustle up some supplies. So they head out to explore the mall.

After a running battle, they safely make their way to a department store but the gunfire wakes Stephen up and over Fran’s objections, and also taking the only weapon between the two of them, heads out to join them.


While trying to find the Peter and Roger, Stephen has his own run in with a ghoul lurking around the malls utility room, but manages to eventually catch-up with the other two in the relative safety of the JC Pennys.


As the trio makes their way back to the safety of their hidden rooms, a living dead Hare Krishna catches a smell of Fran and makes his way to the rooms, and while Fran stacks boxes against the door and throws her own weight against it to keep him out as anyone who ever went to the airport in the 70’s can tell you, it’s damm hard to keep a cultie out.


Still the gang arrives just in the nick of time, saving Fran, who while still very upset takes that opportunity to also let Peter and Roger know that she is pregnant.
Seeing that the mall could be secured Roger, Peter and Stephen decide over Fran’s objections to stay where they are.
The next day with Fran playing sniper on the roof, and Stephen flying back-up in the chopper, Peter and Roger being hauling trucks in front of the various mall entrances to block them off from the undead hordes.
But something’s not quite right with Roger and after having a zombies brains blown out all over his face, he kind of goes off the deep end, and gets careless, which leads up to him having a huge hunk of his leg torn off by the bite of the hungry dead.


Well as everyone knows, this means Rogers a dead man since nobody lives more then a couple of days after being bitten by one of the walkers.


But now stung back into a sharper reality then he really wanted, Roger insists that he help the other three secure their new home while he still can.


And so over the next few days the four finish securing the outer doors, getting the doors inside locked up and finally going on a full scale zombie hunt, wiping out the whole dead population in the mall.

They then do something that I found rather odd and didn’t think made any sense at all, which is to stack all the dead bodies into a walk in refrigerator inside of a restaurant. A walk-in filled with fresh food that I am pretty sure that the gang would want.

Granted this is a movie we’re talking about, but that was always just a weird moment that made no sense to me at all. Certainly they have a better place to dump corpses then with their limited food supply.
Ah well, minutia don’t you know.
Well no sooner is the mall secured and the gang gets to go on a shopping spree then Roger takes a serious turn for the worse, and soon enough after begging Peter to wait until he was certain he is rising before shooting him, Roger dies.

And then sits up, as a single shot rings out across the mall.
Months pass and as the dead continue to pound away on the outer doors getting nowhere, and as slowly the television then the radio goes off the air, the remaining three are left to their velvet prison.


One morning as Stephen is training a very pregnant Fran on how to fly the helicopter from the roof, they are spotted by a gang of outlaw bikers (including make up master Tom Savini), of the type that movies are always filled with. Black hearted guys with nothing but rape, murder and destruction in mind, and they are coming to take the mall.


As the attack begins, Stephen and Roger try to seal off the mall but soon enough the place is filled with bikers and crawling with a larger and larger crowd of the dead.
Trapped in an elevator Stephen is first shot and then attacked by a group of zombies, and is killed.

Meanwhile the bikers are in real trouble as the zombies start overwhelming them while Peter helps out in hiding by picking them off with his rifle.

Soon enough the bikers are all dead and the living dead have taken the mall.


Peter makes his way back to Fran and the two of them begin their wait for Stephen to come back......


......which isn’t too long as the now dead Stephen leads the entire crowd of zombies to the rooms were Peter and Fran are hiding.

Peter tells Fran she needs to leave because he is going to stay and kill himself. As Stephen comes through the door, Peter shoots him....


.....but soon the rest of the dead begin streaming into the room, so Fran makes her way to the roof and begins to take off in the helicopter.

Then just before shooting himself, Peter has a sudden change of heart (as did Romero who in the original planned to kill both Peter and Fran in the end), and decides to live and fights his way to the roof, joining Fran and the two of them fly off into the rising sun, the Dawn of the Dead.


I enjoyed the remake of Dawn, with its action movie take on the traditional horror, but it’s Romero’s original that makes me uncomfortable. And yet Dawn is in many ways a very funny film.
The unstoppable Kirshna, the continual pokes at Americas consumerist economy and even the violent site gags of severed arm in blood pressure machines and the like, are in really bad taste but very funny.

Still this is a very serious and very downbeat film without an easy happy ending, but still with a sliver of hope. Well acted, wonderfully directed, and scary enough to give me the heebe jeebes, Dawn of the Dead is about as good as horror movies get.
Posted by Rick Diehl at 5:41 PM