After Star Trek William Shatner spent several years making a living as a working actor in various movies, TV series and stage productions, but did not return to regular series television. 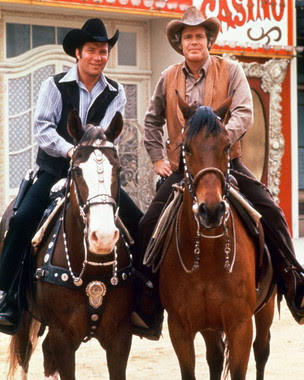 That is until 1975 when he starred as 19th century super-spy Jeff Cable, in the ABC television series, The Barbary Coast.

Beginning as a Movie of the Week, Barbary Coast stared Shatner along with actor Dennis Cole, but when the show was picked up as a series, Cole was replaced by the always enjoyable Doug McClure, playing gambler and con artist Cash Conover.

Now I'm not going to pretend that Barbary Coast was original, because clearly it was a case of some producers having a meeting and deciding that if Wild, Wild, West and Maverick were such hits, then combining them into one show was a sure fire hit.


But despite the lack of originality in plot, the series more then makes up for its shortcomings with the enjoyable, highly over the top performances from the two leads.

Shatner's Cable, is both West and Gordon by being both a sexy leading man doing well with the ladies, while also being a master of disguise, which allowed him to wear a continually changing series of mustaches throughout the run, as the below clip shows. Also note that the badguys are the Rat Patrol's Eric Braeden and Simon King of the Witches, Andrew Prine


Meanwhile MuClure, who in my opinion was always an highly underrated performer, plays comic foil to Shatner, trying to just run a few scams, make a few dollars and bed a few ladies, but instead constantly being pulled into whatever mission Shatner was on this week. 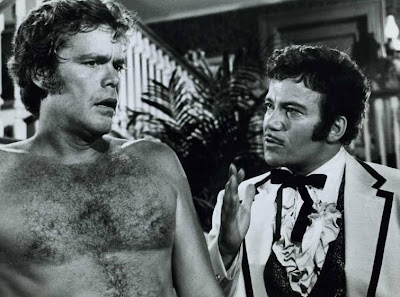 Shatner once said of Barbary Coast that it was a series that lasted two weeks, and that's almost true, but despite it's somewhat corny exterior, I really enjoyed it and still consider it a small highlight of 1970's television.