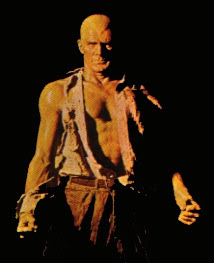 When we moved from Florida to Colorado in late 1972, it was just before my 10th birthday. In a totally new city, a totally new world, I was adrift. Where in Florida I had been a popular kid with lots of friends and part of the "in crowd" at school, I was suddenly something I had never been before, an outsider.

It was a rough time.

But luck was with me because after a few months I became friends with one of the other kids on the fringes, a shy kid from a poor family named Norman Haley.

Norman's dad was a general handyman who worked for whoever was hiring, but he had managed to buy a nice little piece of property, that was like Wonderland for little kids. In the yard they had a few beat up cars, but they also had the remains of a small twoseater airplane that we spent hours flying urgent missions in.

Another part of the yard was set up as a permanent camp site with tents and a cook stove, and around the back of the house and down a dirt path was a small creek that they had partially dammed off creating a near perfect swimming hole.

Even Normans room was cool, being an old root cellar that had been converted into a real room, but still only accessible by climbing a small ladder underneath the house.

The Haley house was a boys paradise.

Now the Haley family were not a big reading bunch, except for two things.

First they all read comics, Mom, Dad, Norman, his brothers Lonnie and Charles, their sister Teresa, all of them.

And on a bookshelf, kept in excellent condition a nearly complete set of Doc Savage paperback books.

Mr. Haley had grown-up reading Doc in the pulps and had then bought the Bama editions as they had come out.

One day he gave me a beat-up copy of the "Man of Bronze", the first book in the series and told me that I needed to read Doc Savage, because not only were Doc's adventures great fun to read, but that they would also teach me the right way to look at the world.

He was right too.

Doc taught me to not only care about right and wrong, but also to crave the unknown, to seek adventure and to try to be the very best I could be.

Not all the lessons stuck into middle age I grant you, but the ideal was there.

To this day, one of my happiest memories of childhood is remembering all of us kids in the Haley backyard in our swimsuits, laying in the sun reading comicbooks and Doc Savage pulps.

Happy geek that I am, I had found my place in the world
Posted by Rick Diehl at 8:20 AM