Seeing Captain America the other night got me to thinking about how World War II was portrayed in the cartoons of the era. After all the war coincided with the period in time when American animation was at it's peak and other countries were not far behind.

Nationalistic, jingoistic and full of racial and ethnic stereotypes these films are a product of their era and while I won't apologize for them, I will say that they need to be judged by the times they were created in.
First up is our old friend, Tex Avery, and his 1942 short, Blitz Wolf.
Using the classic story of the Three Little Pigs, Avery spends the first half of the film showing the foolishness of appeasement and the second half is good old fashioned slap stick as Adolf Wolf finds out what happens when you try to invade the good people of "Pigland".
Funny, but with a serious message, Avery works in some powerful shots of tanks on the move broken up with his normal visual slapstick humor.
From 1941 is the Soviet propaganda film Fascist Boots on Our Homeland 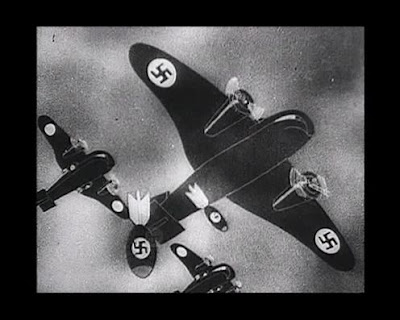 In this film, brutal beast like Nazi monsters run rampant on the Soviet motherland, but are stopped by the combined forces of the Soviet people. Completely over the top, but at the same time a brilliant example of the boot to face style of propaganda the USSR was famous for.
I don't have a still for the next film but below is Der Storenfried, a 1940 German cartoon where a family of peaceful hares are rescued by evil Russian foxes by the Honeybee Luftwaffe, in a celebration of German air power.
Speaking of the Soviets, here is a Warner Brothers cartoon from 1944, titled Russian Rhapsody where Adolf gets his butt kicked by a bunch of Gremlins from the Kremlin, in a rare American pro-Soviet cartoon.
There is just so much material from this era that's worth a look, that I think I'll be revisiting the subject before too long.
Posted by Rick Diehl at 11:42 PM