Diner of the Living Dead

To those not in the know Fridays was a late night television series from the early 1980's that was ABC's attempt at grabbing the Saturday Night Live audience. 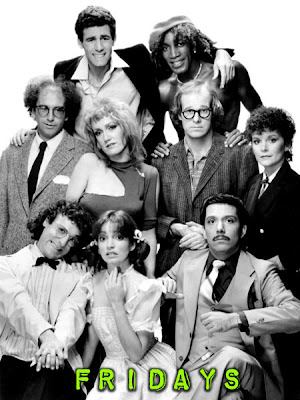 With a cast that included both Michael Richards and Larry David, Fridays slogged along for a couple of years of sometimes funny sketches with lots of politics and lots of drugs, which was pretty standard at the time. The most impressive part of Fridays was probably their musical guests, which included the first American appearances of the Clash and the Pretenders.

In their time, despite the drug humor and the sexual innuendo, running through most of their bits, only one sketch was pulled from the air and never rerun again, the relatively low key, Diner of the Living Dead.


In our world where the Walking Dead is a major hit and Zombies are a dime a dozen it's a little hard to imagine that at one point this sketch was pulled as being too bloody and gross for late night television, but that was what happened.
ABC's switchboard went crazy with upset viewers who thought that the network had gone too far with this sketch, which really by modern standards is actually pretty lightweight.

So here it is as a historical tidbit if nothing else.
The Ronnie Horror Show, now that was funny.
Posted by Rick Diehl at 6:01 PM