After the box office success of American International Pictures, Blacula several small producers specializing in the drive-in movie second features dived into the horror/blaxploitation pool with mixed success. I use the term loosely, but one of the "better" of this bunch was 1973's, Blackenstein, the Black Frankenstein 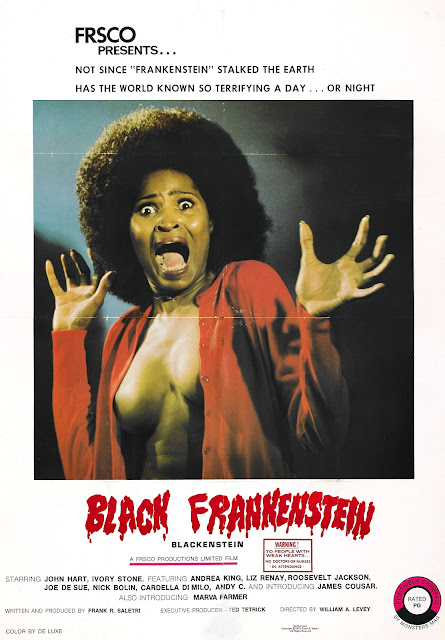 Vietnam veteran Eddie Turner comes home from the war, minus his arms and legs, but luckily for him his girlfriend works with the Nobel Prize winning scientist, Dr. Stein, and it looks like his amazing "DNA Solution" can regrow Eddie's lost limbs.

And in fact the procedure is a huge success, a soon enough Eddie is up and about walking and holding his girlfriend in his newly grown arms.

But kindly Dr. Stein's assistant Holcomb, who also as a thing for Eddie's girl, sabotages the experiment, turning Eddie into a shambling, homicidal creature. 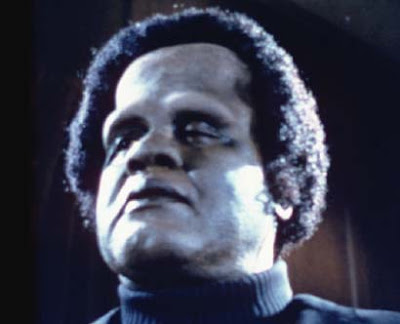 After several murders and general mayhem, Dr. Stein and Eddie's girlfriend do what they can to save our hero, but  it's too late, Eddie's not home anymore and all that's left is the creature of the dark, Blackenstein

Shot on a stunningly low budget and with some truly terrible acting, Blackenstein never the less manages to tell it's story with a sense of humor and a little bit of style. Granted that in comparison, Blacula is practiclly Shakespeare, but still a nice little piece from a great grindhouse era.
Posted by Rick Diehl at 6:13 AM