I was thinking  bit about the late producer/writer/director Bob Clark.

Clark was easily one of the great independent filmmakers of the last 40 years, responsible for some of the biggest moneymakers in Canadian cinema. Best known to the mainstream audiences as the co-writer and director of the classic film, A Christmas Story ...

A Christmas Story, did okay at the box office and of course has grown to become a Christmas tradition and a DVD staple. The story of a young boys Christmas quest for a Red Ryder BB gun was a sweet, gentle blend of nostalgia and comedy that deserves its place in the holiday pantheon.
Clark's other big mainstream success was a thousand miles in the other direction, the teen sex farce, Porky's,

Now don't get me wrong, Porky's is rude, raw and grossly funny, but it also has some rather surprising quiet moments where the characters actually have a chance to develop and build a relationship with the audience. It's not a great film, but it is one of the best of its breed.
But that's the thing about Bob Clark, he wasn't interested in telling one kind of story or making one kind of film. His work was as diverse as the proto-slasher film Black Christmas, the Jack Lemmon film, Tribute, the low budget Night of the Living Dead rip-off, Children Shouldn't Play With Dead Things to the dreadfully awful Baby Geniuses and even worse the Dolly Parton, Sylvester Stallone vehicle, Rhinestone.


Clark was all over the place, he even directed the Dukes of Hazzard.

My favorite film of his however, was the star-studded 1979, Sherlock Holmes vs Jack the Ripper feature Murder by Decree, starring Christopher Plummer as a first rate Holmes and James Mason as a highly enjoyable Watson.


Not to throw aspersions on a great writer, and maybe the fault is history's, but Alan Moore's excellent graphic novel From Hell, shares quite a few plot points with Clark's exceptional period mystery. Every body is there from the insane physician and his coachman, the surprised psychic stumbling onto answers he doesn't want to know, Eddie and the sad and doomed Annie Crook, all played out with style and seriousness, making for a far better film then the Johnny Depp mess from a few years ago. 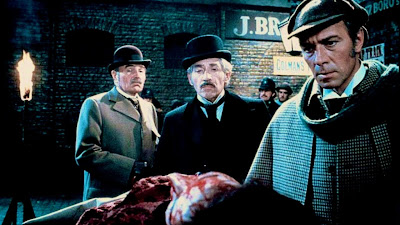 The thing I admire about Clark is that while the quality of his work is all over the place and his final films cover the range from exceptional to awful, he controlled what he made.
Like so few other filmmakers before him Clark was a true auteur, in control of his work from beginning to end and for better or worse, and that's to be admired by all fans of film everywhere.
Posted by Rick Diehl at 5:11 AM