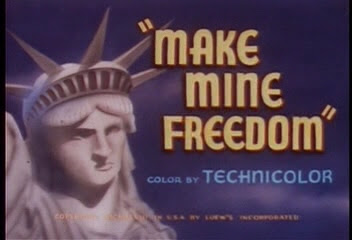 With the end of the second world war, the nations of Western Europe and the United States now found themselves in a simmering conflict with the Soviet Union.

In just a few years the USSR had gone from the allies to villains and in no place was that more obvious then in the propaganda cartoons and "educational" films from the era.

Make Mine Freedom, directed by long time animator John Sutherland,  was produced in 1948 at the religious based Harding College of Searcy, Arkansas, and  uses animation to explain why good Americans just can't trust anyone selling an "ism".

Extremely pro-business, Make Mine Freedom does its very best to get the message out that being in a union was about the same thing as marching in Red Square, and does it in a funny and enthralling manner, making for a first rate piece of propaganda.