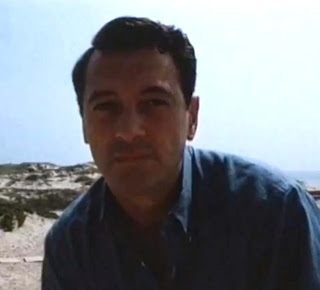 A few days ago on YouTube, a poster named Soapbxprod posted some fascinating home movies of a party held on Labor Day 1965 at the home of screen legend Rock Hudson.

Shot by actor Roddy McDowell, these films feature Hudson as well as Lauren Bacall, Robert Wagner and a variety of other actors and showbiz people including Mrs Howell herself, Natalie Schafer.

The great thing about these films are that while they are just your standard everyday home movies, they still manage to give us all a nice inside look at celebrities relaxed and not "on", which is really good fun to watch.

I'm posting both entries, but I have to say that I part 1 and part 2 seem to me to be the exact same film, but just in case I'm missing something I'm putting both up.

And just for fun, here's a clip of, Ricardo Montalban, Lee Remick, Dennis Hopper, Tuesday Weld, Hayley Mills and Suzanne Pleshette at an different party in Malibu during the same Summer.

Good times with the Beautiful People.
Posted by Rick Diehl at 9:03 PM