Originally created by Jack Kirby and Stan Lee for an issue of the Fantastic Four, Him was a genetically perfect being created by a group of criminal scientists. Him's first act was to murder his "parents" and leave the planet heading into space.

Roy Tomas took the character several years later and gave him a name, Adam Warlock, and a job, Cosmic Messiah. The messiah of "Counter Earth" that planet circling exactly the opposite of Earth on the far side of the sun. 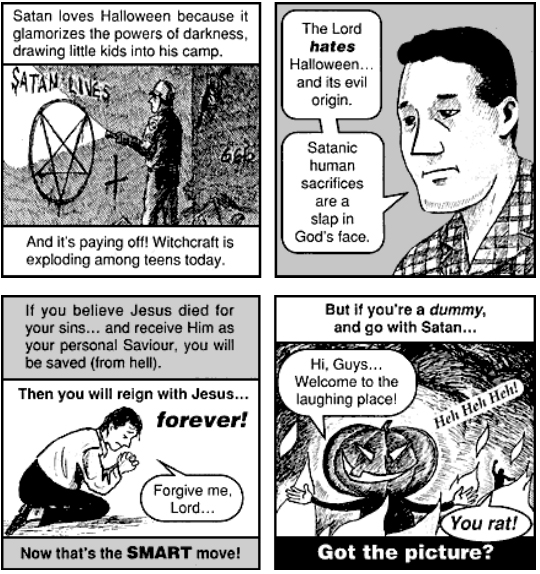 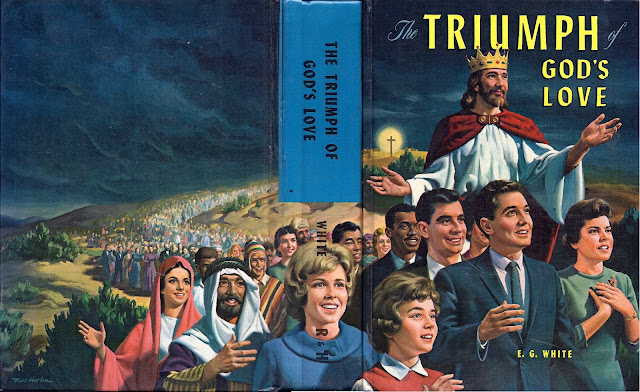 
I'm just a movie watching guy these days. This morning I've been enjoying director William Friedkin's 1977 adventure film, Sorcerer. In a remake of 1953's Wages of Fear, Roy Scheider is one of four men hired to drive an unstable shipment of nitroglycerin through the rough roads and flooded jungle of an unnamed South American dictatorship. Beautifully shot, with palpable tension, as trucks slowly crawl across rope bridges and impossible obstacles it is a gut wrenching visceral experience.


Despite being a first rate film, Sorcerer was a huge financial bomb on it's original release, Director Friedkin has blamed the lack of success of the film on the reality that it opened at the same time as another little movie, Star Wars. While it is true that not much was able to stand up against the pure drawing power of the original Star Wars, I'm not so sure I can agree with Friedkin.

I'm of the opinion that Sorcerer's failure at the boxoffice was almost 100% because despite being an adventure film about truck drivers in South America, people convinced themselves it was going to be a horror movie. Sorcerer was Friedkin's first film since 1974's The Exorcist, which was one of the most influential and critically important horror films of all time. A movie that had so successfully scared the shit out of modern american that as far as the audience was concerned the only way he could top the Exorcist was to make an even better horror film. And besides it was named Sorcerer, so how could it not be a horror film. This is despite the fact that Friedkin had already directed the French Connection and was known for action. The trailer certainly doesn't push the horror vibe either. But never the less, once the first audiences went to the theater and discovered that what they were seeing was a taunt action film about truck drivers in South America instead of a scary movie, word of mouth got around and people stayed away in droves.

Which is a shame, because in its own right, Sorcerer is a very good movie. The four leads, Scheider, Amidou, Bruno Cremer and Francisco Rabal all put in strong performances. The film is beautifully shot, and the tension going throughout the entire film right up to it's shocking ending could be cut with a knife. 40 years on this film holds up. Fairly obscure, but worth the time, Sorcerer is yet another example of 1970's gold at the movie theater.


I often refer to my comic collection as The Pile. It drives my wife a bit crazy that I don't really sort them, and never use bags or boards. But honestly I like it that way. 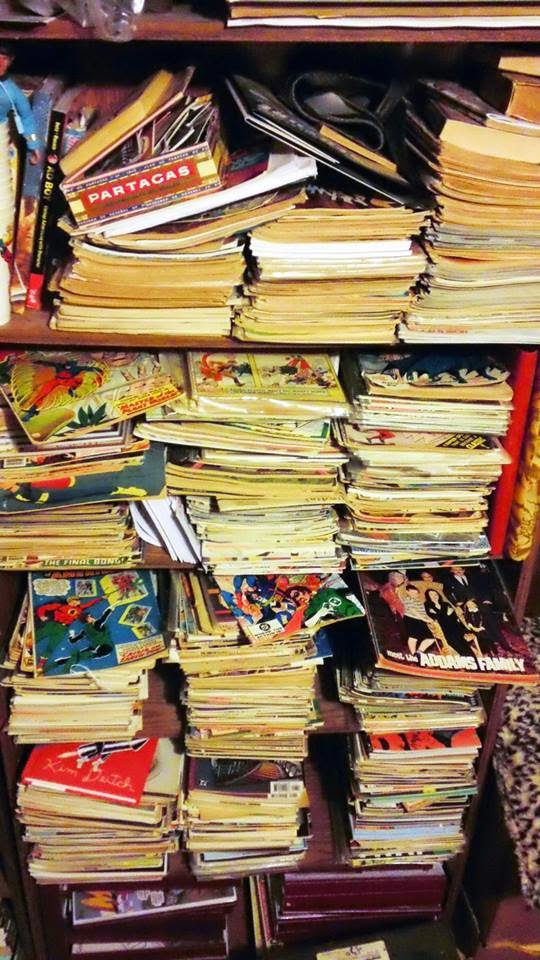 But it’s death for Bonnie and Clyde

This year will also see the 80th anniversary of the death of John Dillinger, Pretty Boy Floyd and Baby Face Nelson. 1934 was a rough year to be a badguy.


The Ballad of Bonnie and Clyde
by Bonnie Parker

You’ve read the story of Jesse James
Of how he lived and died
If you’re still in need of something to read
Here’s the story of Bonnie and Clyde.
Now Bonnie and Clyde are the Barrow Gang,
I’m sure you all have read how they rob and steal
and those who squeal are usually found dying or dead.
There’s lots of untruths to these write-ups
They’re not so ruthless as that
Their nature is raw, they hate all law
Stool pigeons, spotters, and rats.
They call them cold-blooded killers
They say they are heartless and mean
But I say this with pride,
I once knew Clyde
When he was honest and upright and clean.
But the laws fooled around and taking him down
and locking him up in a cell
'Til he said to me,
"I’ll never be free,
So I’ll meet a few of them in hell."
The road was so dimly lighted
There were no highway signs to guide
But they made up their minds if all roads were blind
They wouldn’t give up 'til they died.
The road gets dimmer and dimmer
Sometimes you can hardly see
But it’s fight man to man, and do all you can
For they know they can never be free.
From heartbreak some people have suffered
From weariness some people have died
But all in all, our troubles are small
'Til we get like Bonnie and Clyde.
If a policeman is killed in Dallas
And they have no clue or guide
If they can’t find a fiend,
just wipe the slate clean
And hang it on Bonnie and Clyde.
There’s two crimes committed in America
Not accredited to the Barrow Mob
They had no hand in the kidnap demand
Nor the Kansas City Depot job.
A newsboy once said to his buddy
"I wish old Clyde would get jumped
In these hard times we’s get a few dimes
If five or six cops would get bumped."
The police haven’t got the report yet
But Clyde called me up today He said,
"Don’t start any fights, we aren’t working nights,
we’re joining the NRA."
From Irving to West Dallas viaduct
Is known as the Great Divide
Where the women are kin,
and men are men
And they won’t stool on Bonnie and Clyde.
If they try to act like citizens
And rent a nice flat
About the third night they’re invited to fight
By a sub-gun’s rat-tat-tat.
They don’t think they’re tough or desperate
They know the law always wins
They’ve been shot at before,
but they do not ignore
That death is the wages of sin.
Some day they’ll go down together
And they’ll bury them side by side
To few it’ll be grief,
to the law a relief
But it’s death for Bonnie and Clyde.
Posted by Rick Diehl at 8:24 PM No comments:

Written by Tony Isabella with are by a wide variety of great artists, this was another great calendar from the House of Ideas. 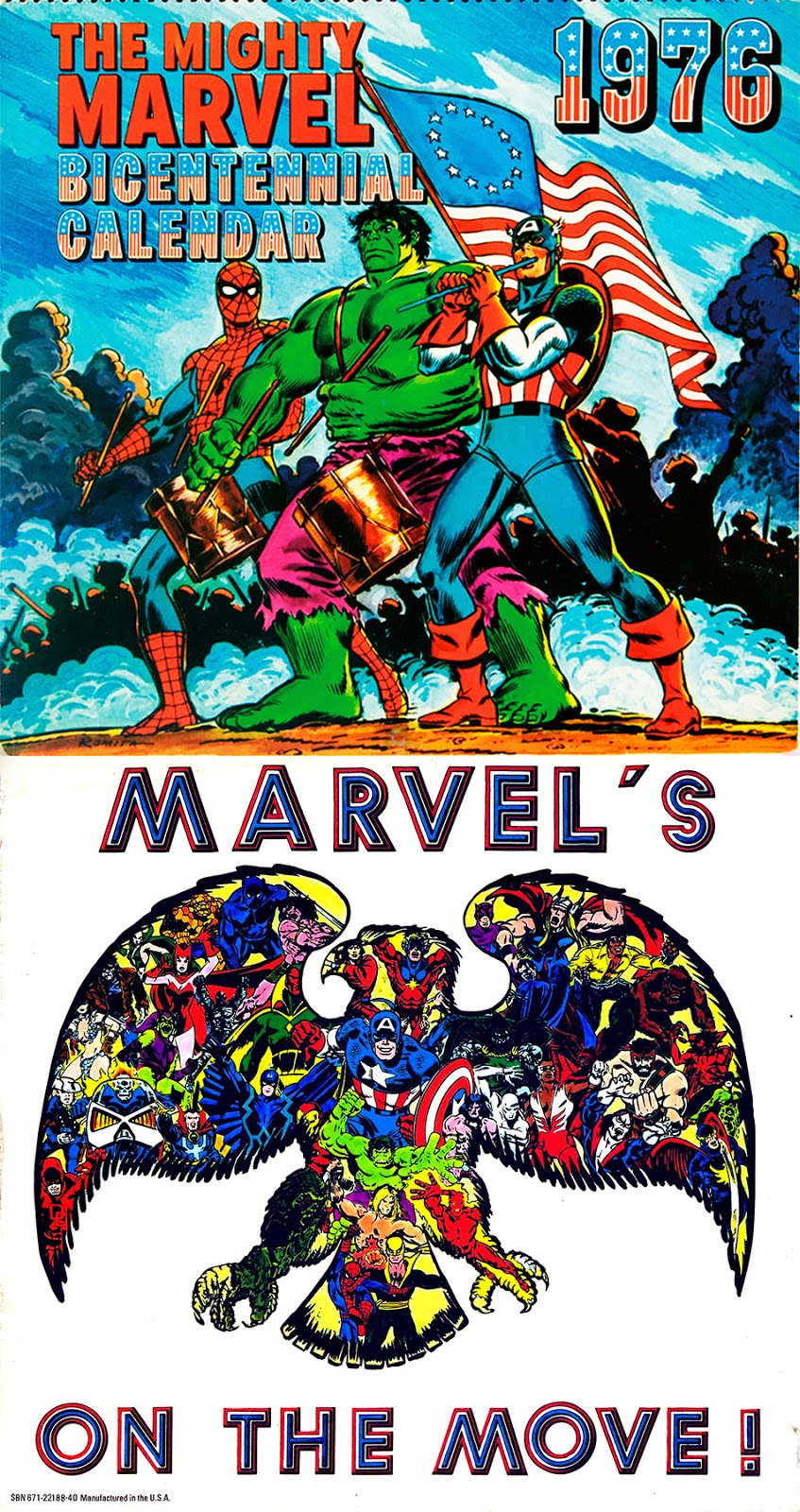 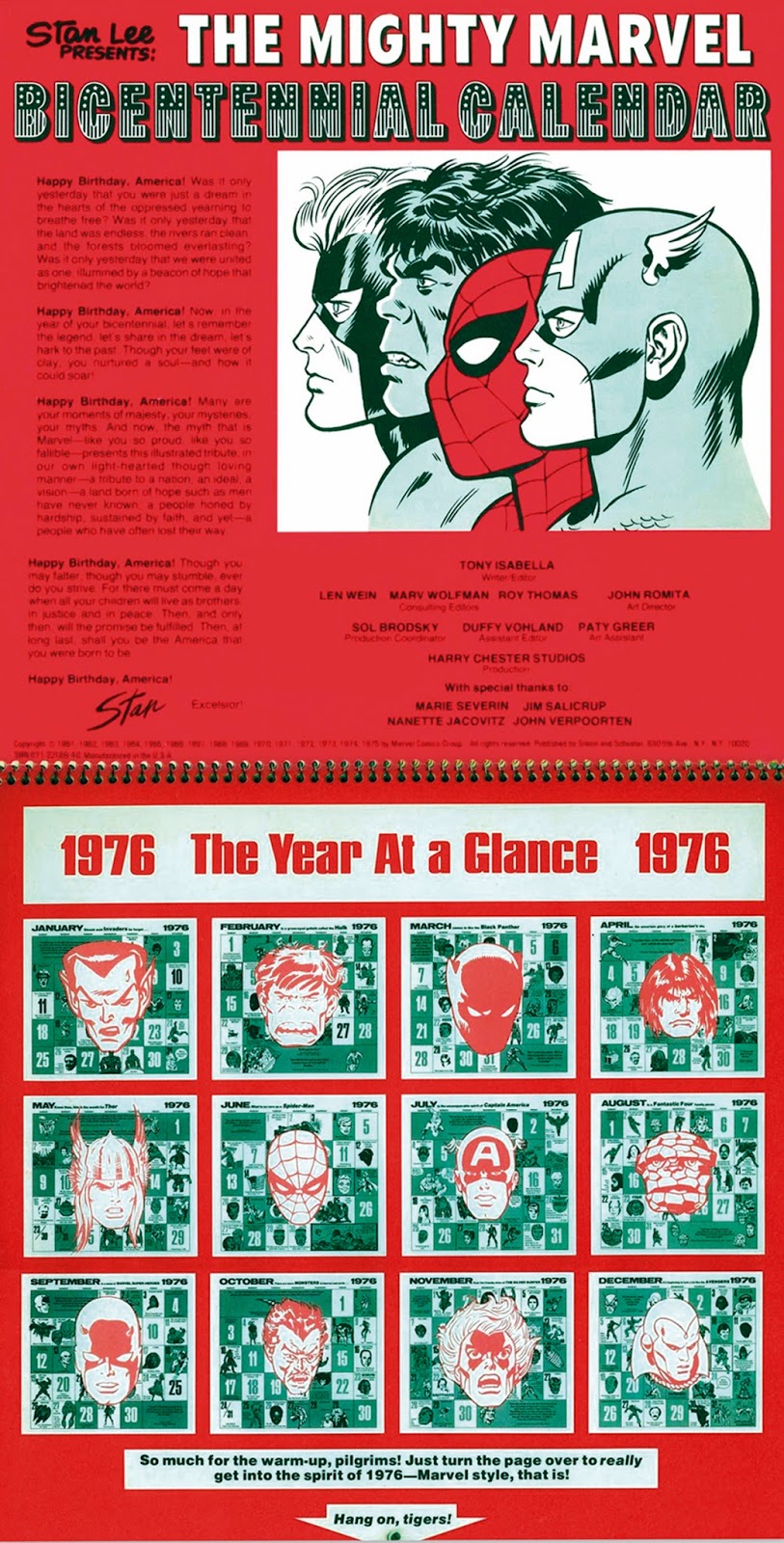 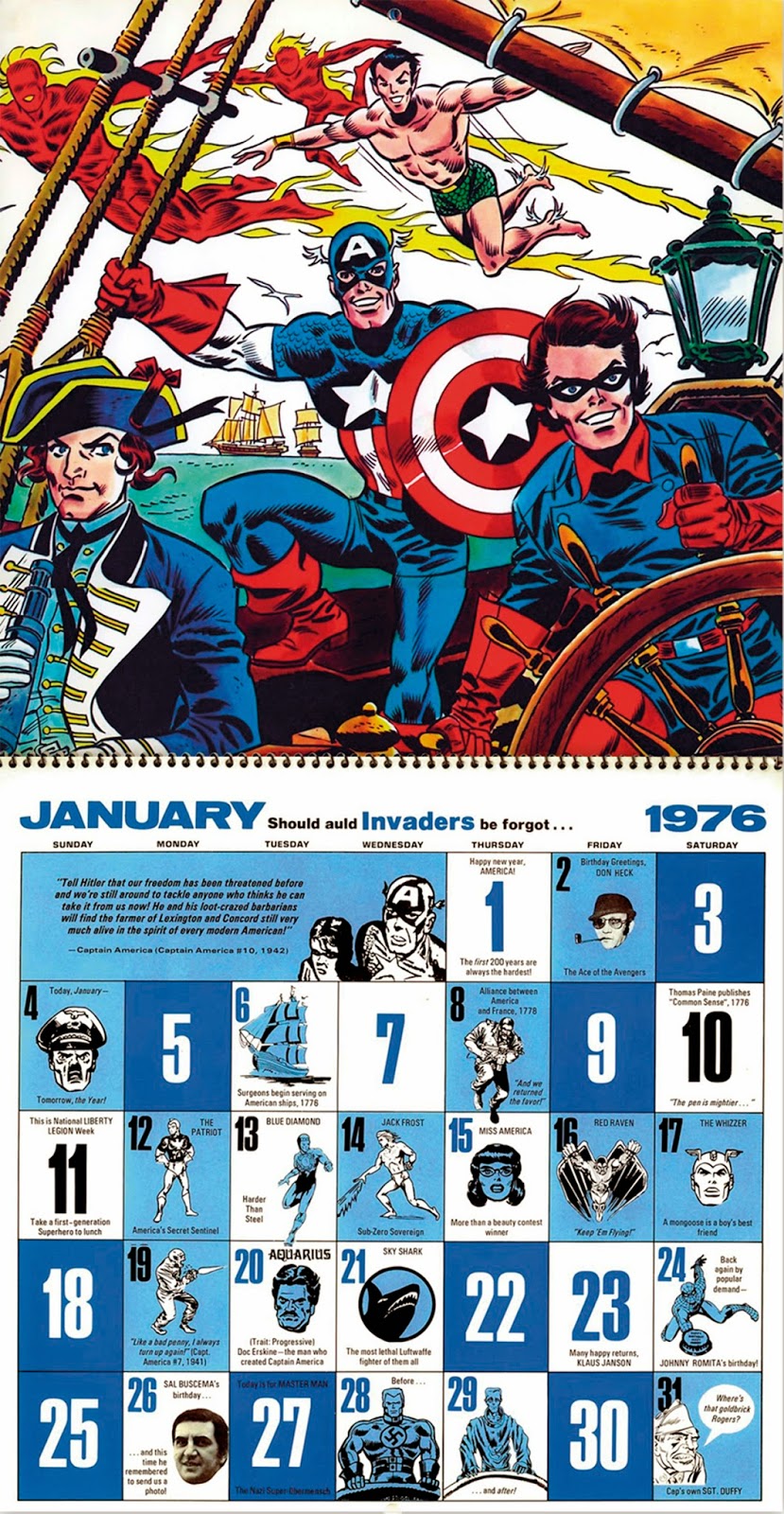 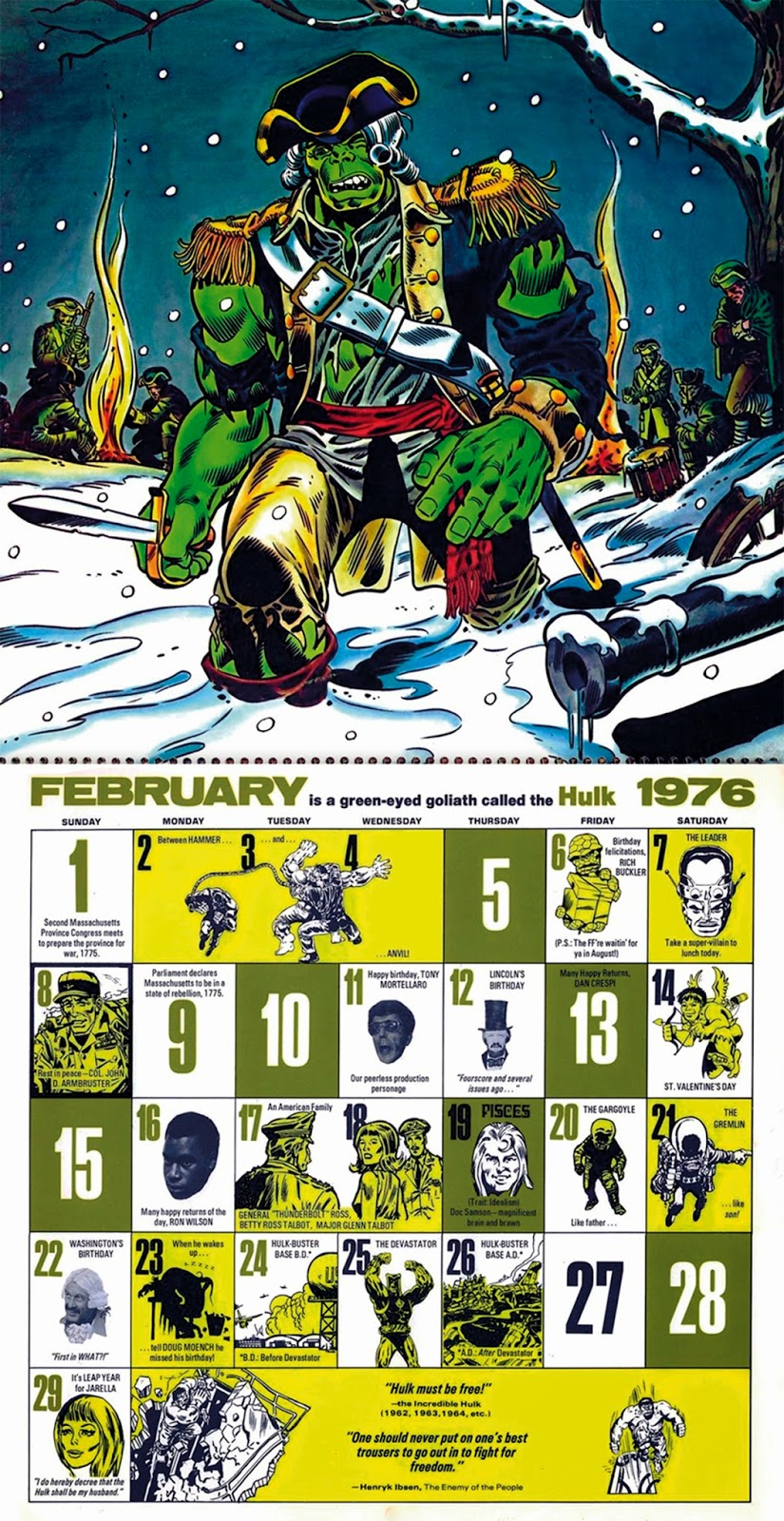 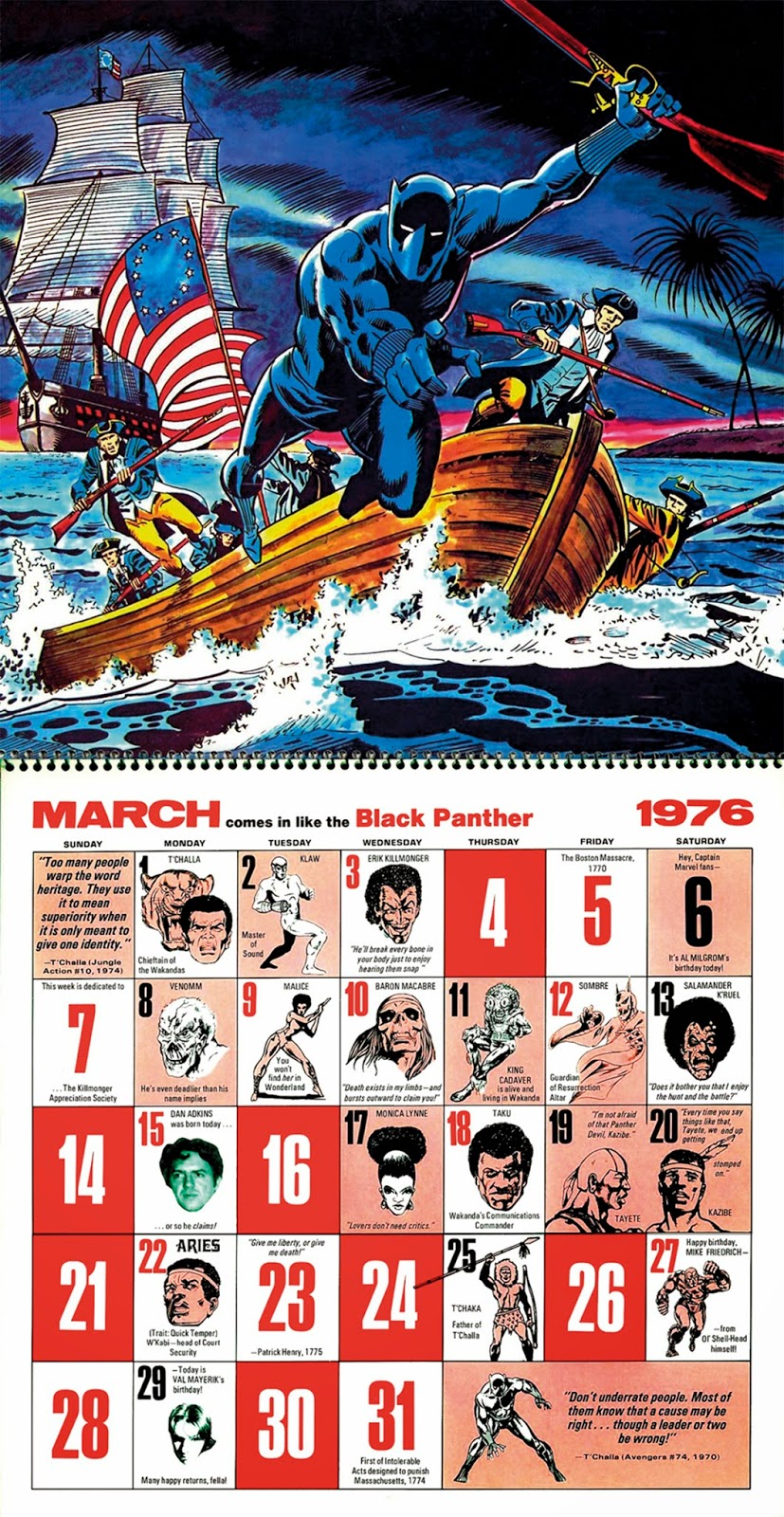 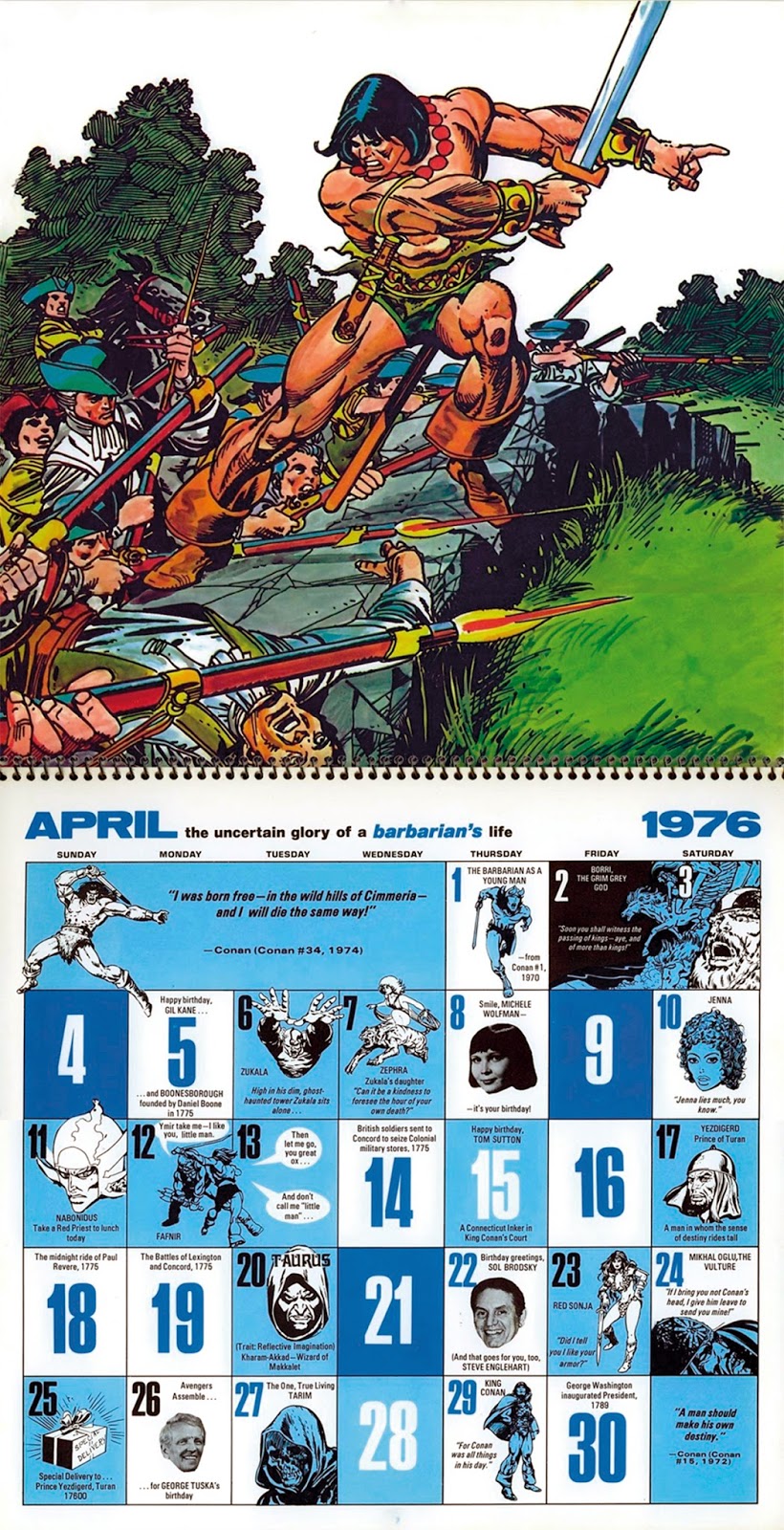 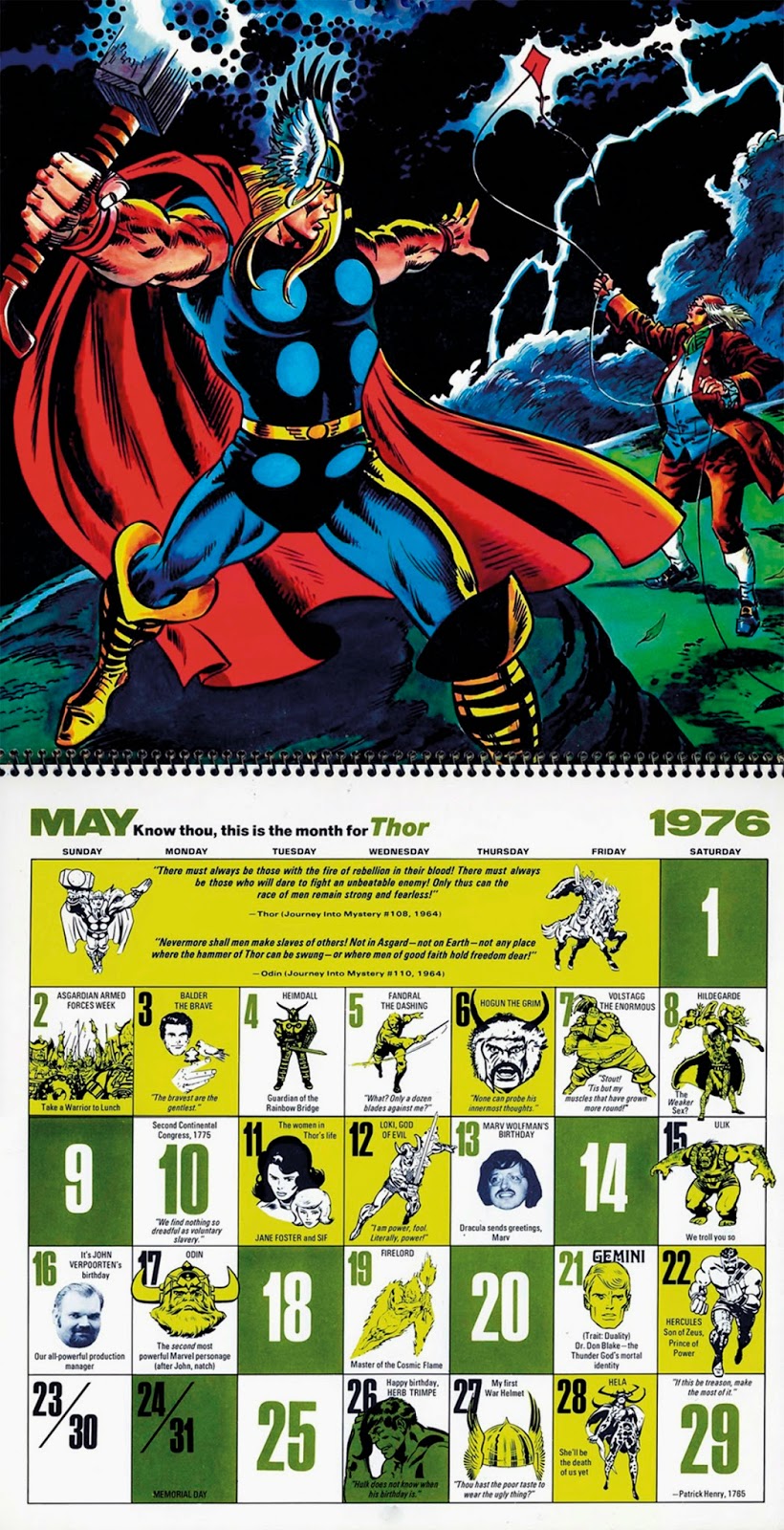 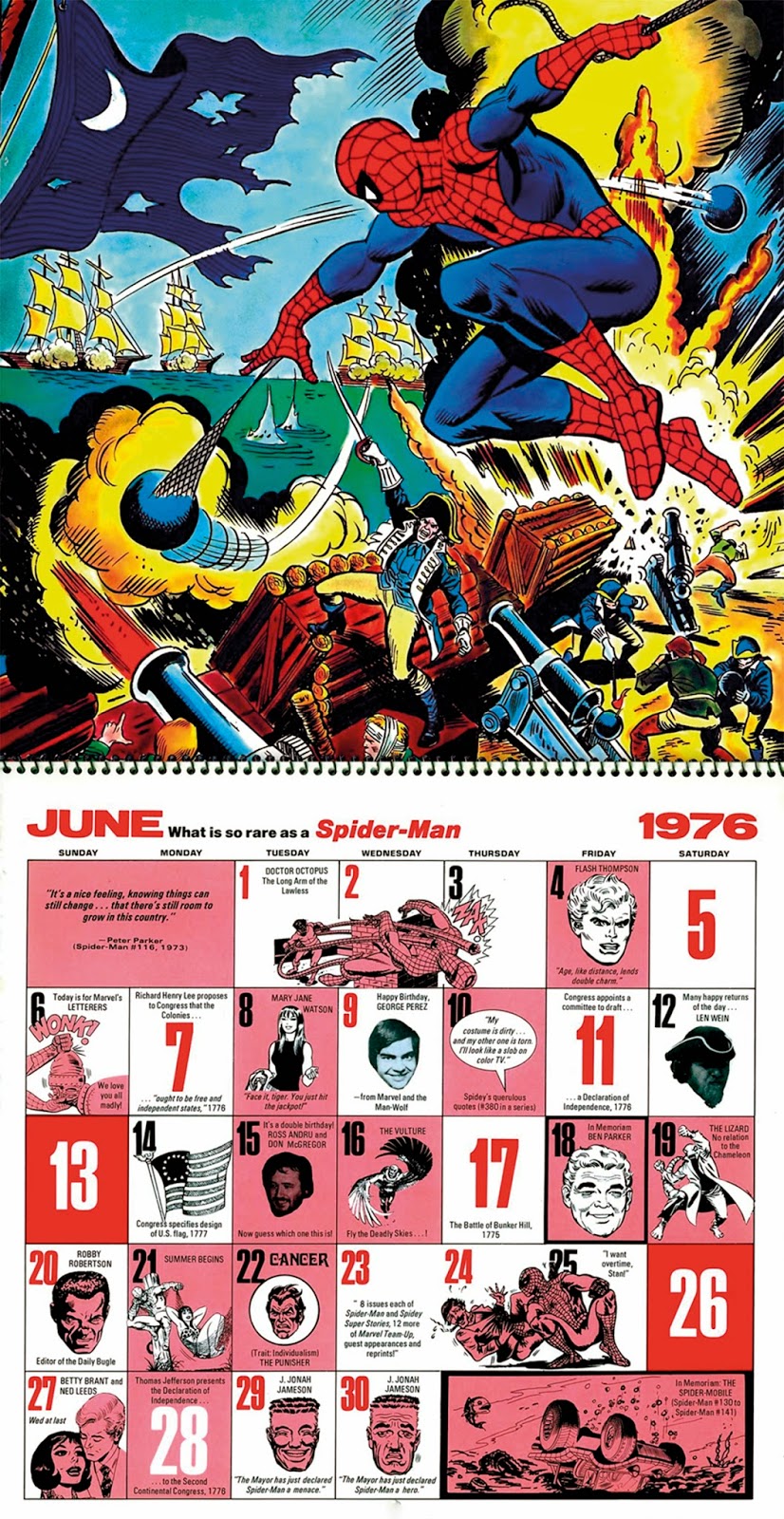 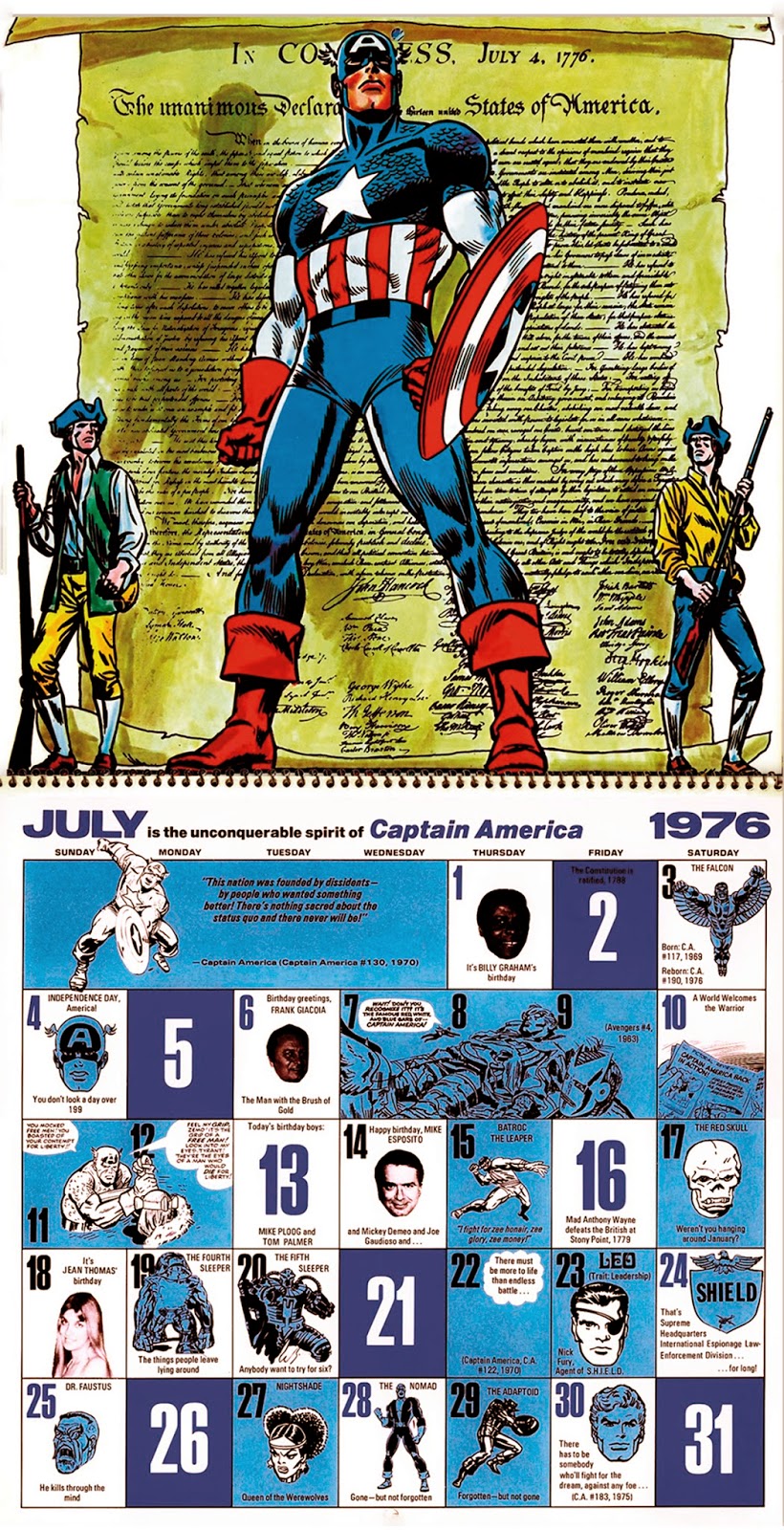 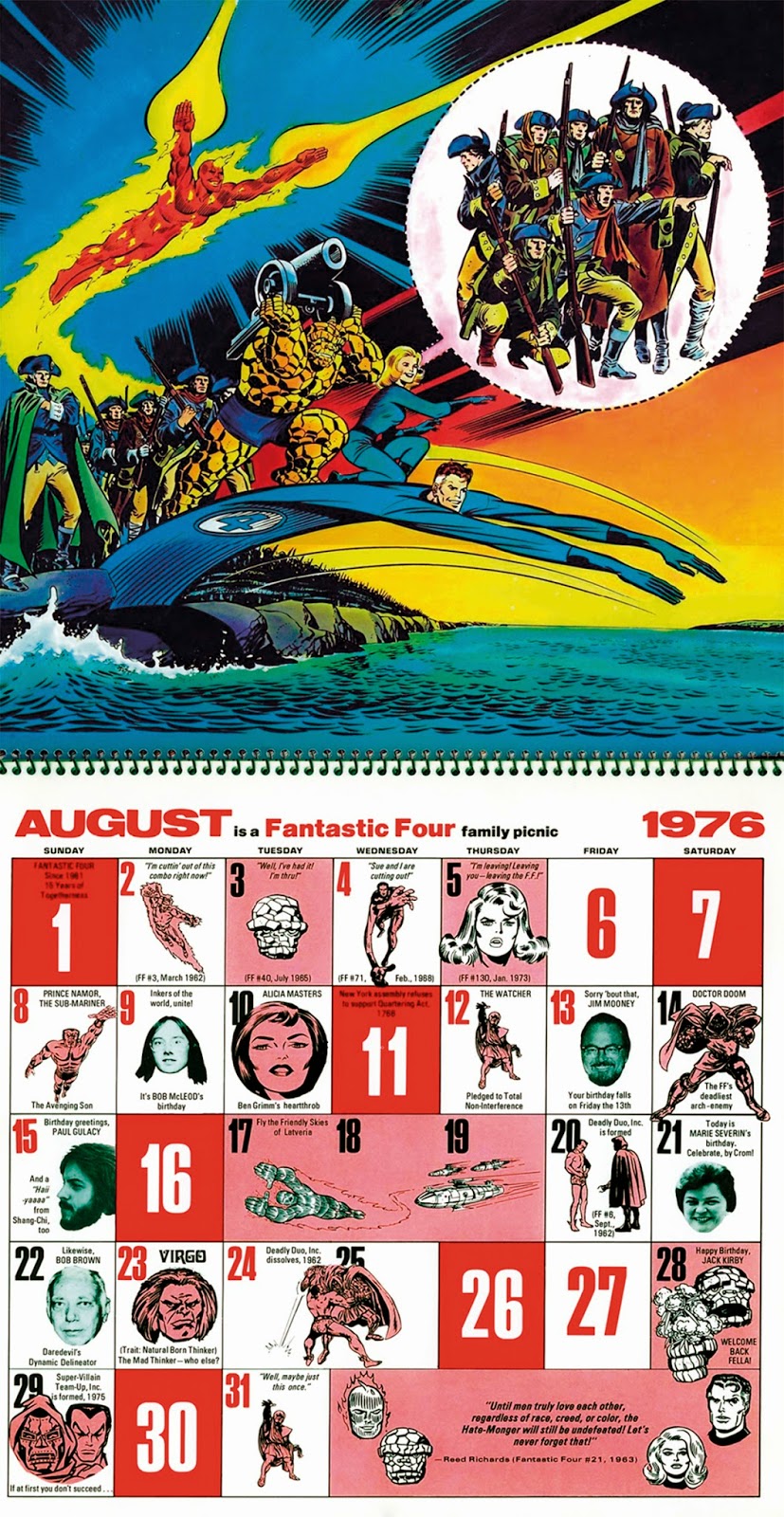 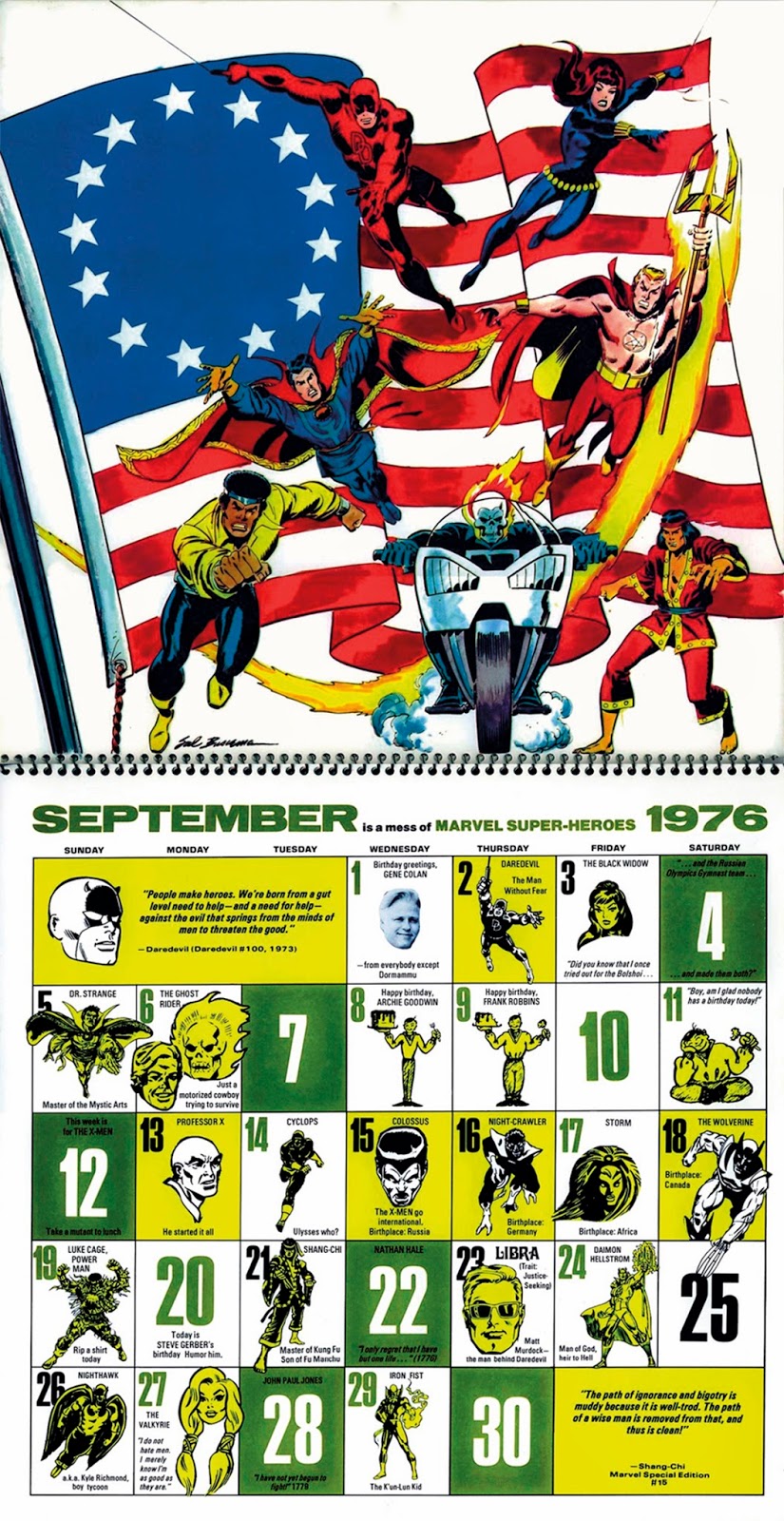 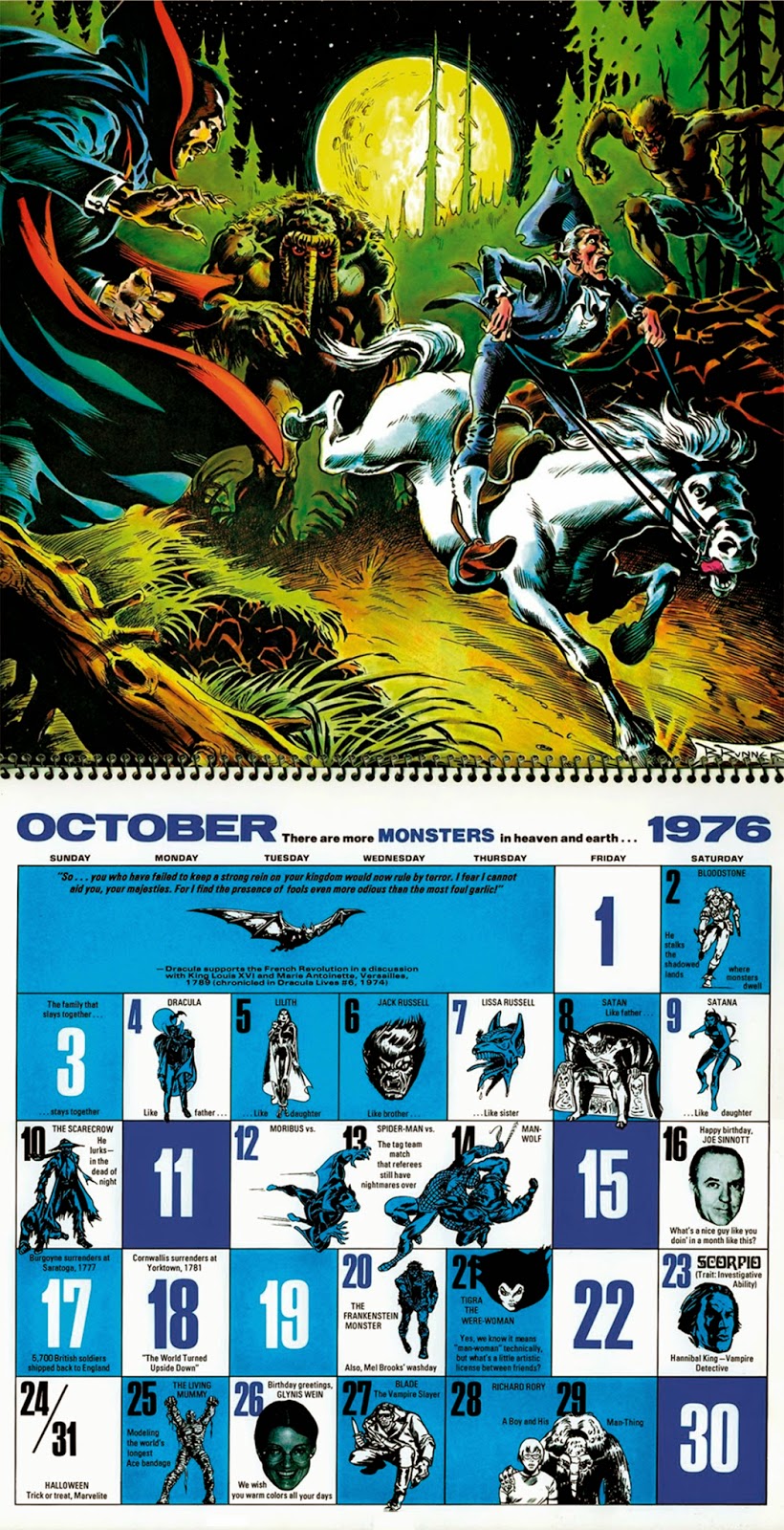 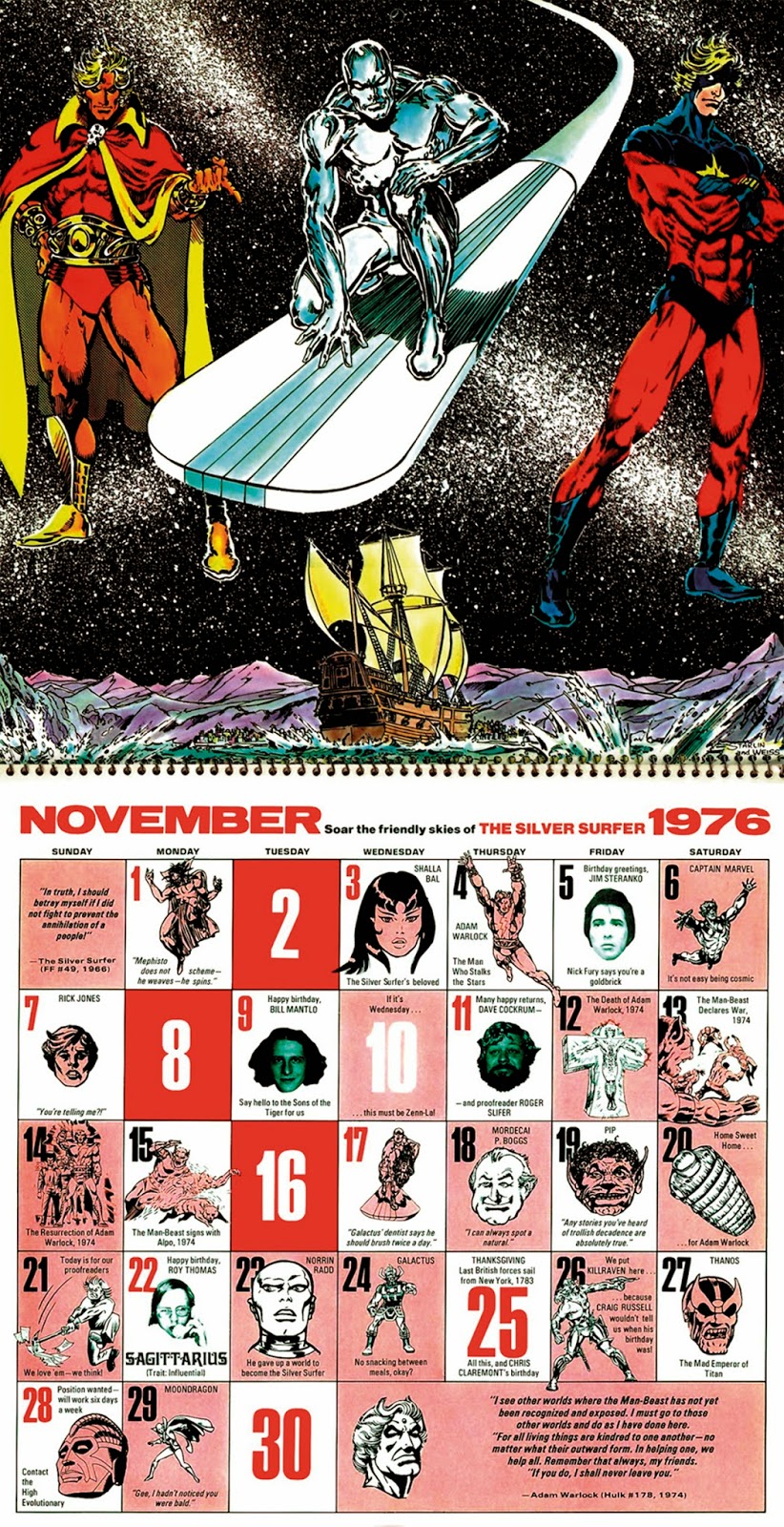 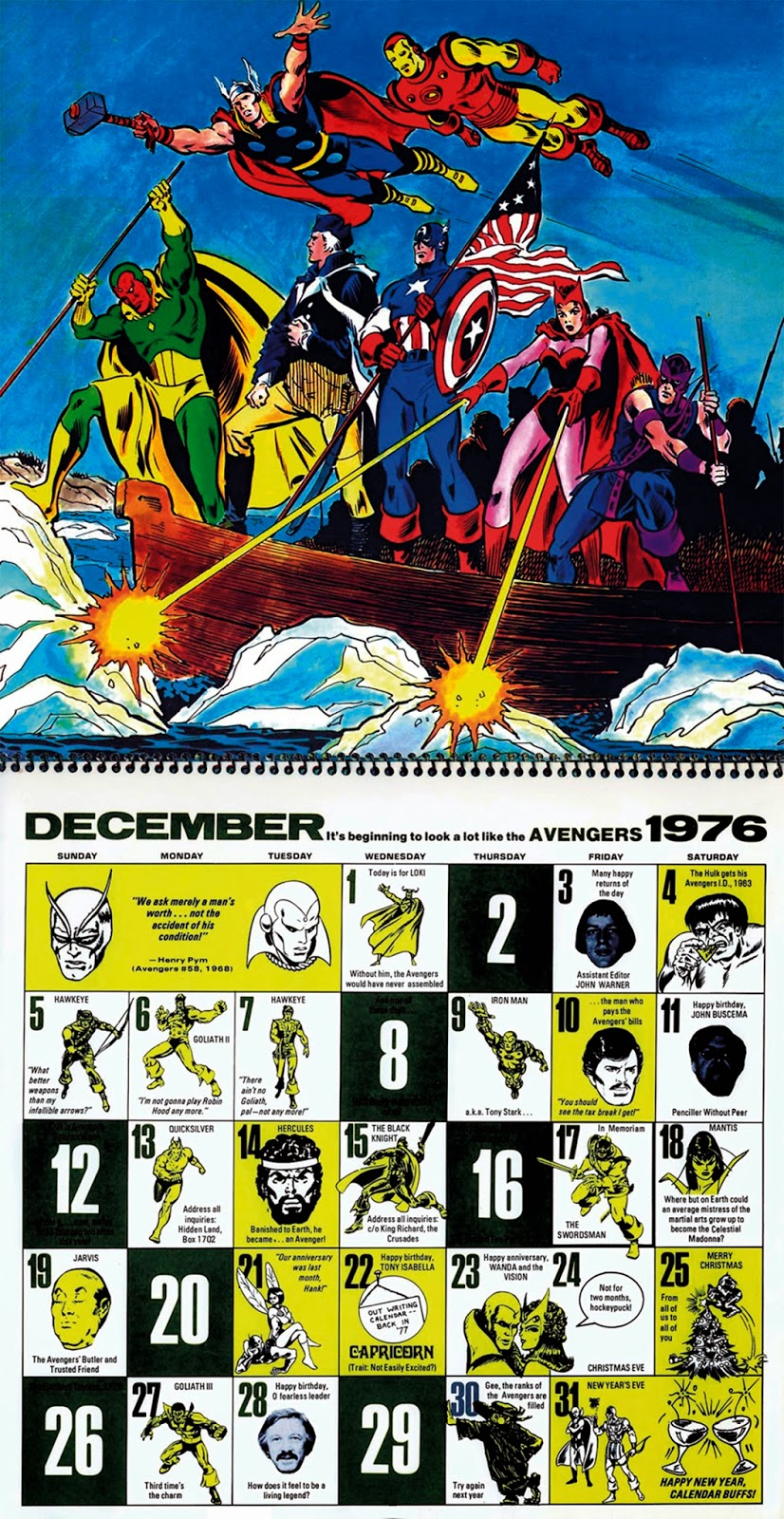 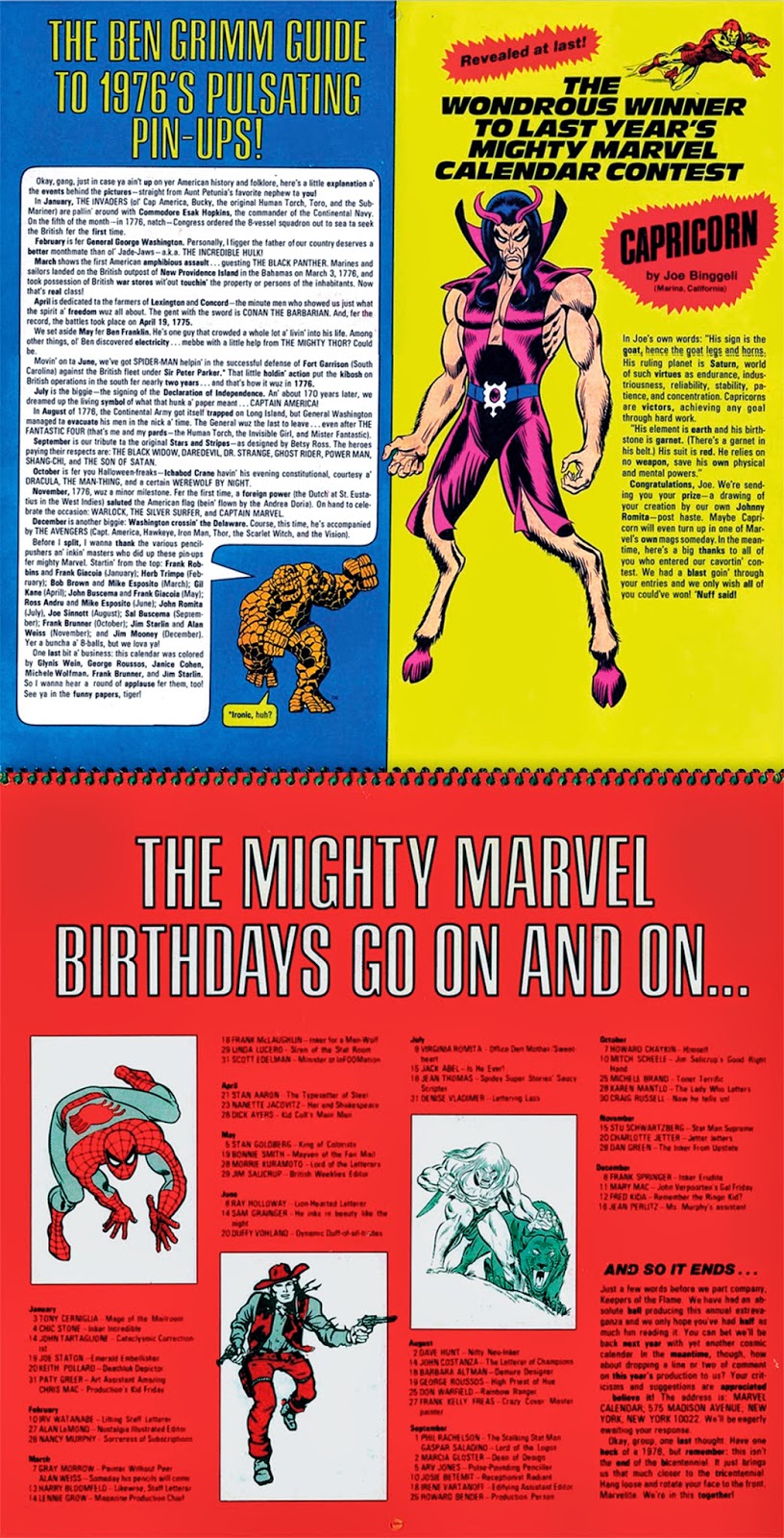 As kids most of us had our fair share of bubble gum cards. One of my personal favorites, were the stickers Topps put out for Marvel Comics. Here is a large selection of character stickers from the 1976 edition.

Sure the jokes are dumb, but at 12 they weren't that bad really. 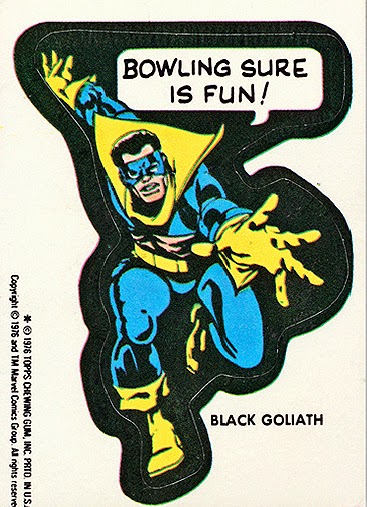